SAVILLS PRESENTS A MACRO ANALYSIS ON THE MALAYSIAN PROPERTY MARKET

BUKIT JALIL: Despite alarming reports from (NAPIC) about the increase of 65% of unsold properties, the market isn’t as weak as speculated, said Savills Malaysia executive chairman Datuk Christopher Boyd.

Speaking last week at Trinity Office, he said that most of the units stock should not have been built in the first place. He believed that it is a normal process, considering that the overactive market had been caused by those who were over exuberant.

“This creates a mismatch between product and price, but it doesn’t categorise the whole market as a sector,” he said, adding that the population is growing just under 2% per annum, which on a world scale, translates to a high growth rate.

According to Christopher, during 2016 and last year,  developers have been pumping up new supply at a rate of close to 8% per annum of existing supply. Despite a period of increase in value, developers have reacted by cutting down new supply in Greater KL to below 1% of the existing stock. 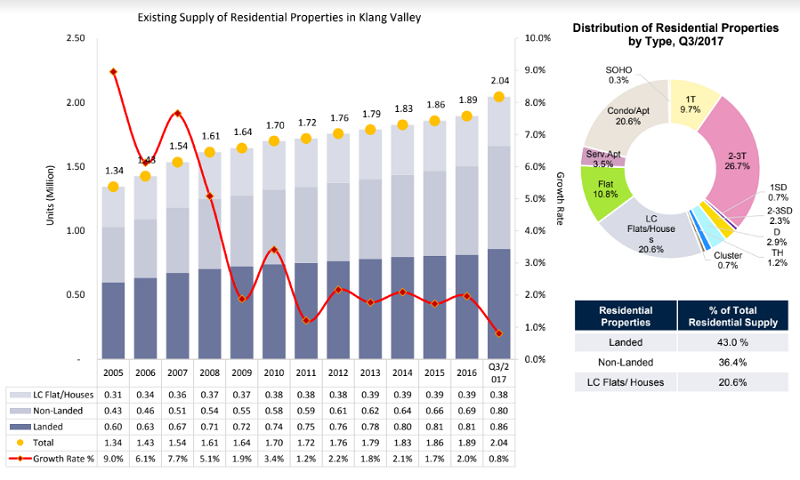 He also believed that the US and China trade war and the change in government had unsettled the market. However, with the Malaysian economy is growing with close to full employment, Christopher predicted that the existing overhang developments would be mopped up quite quickly in around a year and the price will pick up as demand grows.

As at the third quarter of last year, there were 2.04mil existing residential units in Greater KL, a growth of 7.9% from 1.89mil in previous year. This works out to just under four people per unit, down from seven or so in the mid-1970s.

Serviced apartments and SOHO constitutes the largest supply growth per annum, at 16.4% and 59.2%, respectively in the third quarter of last year.

Christopher said that with increase in land prices in the past decades, high-rise developments make up a greater proportion of the overall development, as it allows for the more efficient use of scarce land. According to Christopher, the market from 2006 to 2012 was largely fueled by easy credit. This was the period when creative financing packages such as zero down-payment and the developer interest bearing scheme (DIBS) emerged.

As credit policies tightened in 2012, coupled with falling oil prices and global economic uncertainties, market activity was on a downward trend with total transactions as of the end of 2016 has declined by 25% since 2012.

However, the average value per transaction grew steadily despite the decrease in total market value, mostly due to inflationary pressure.

“We expected 2017 to be equally challenging for the property market as the large, new supply launched between the year 2013 to 2016, are added into the market.

“Nevertheless, it is unlikely that any product from the proposed redevelopment would hit the market before next year, allowing ample time for recovery,” said Christopher. The index for all house prices in KL and Selangor grew at a double-digit rate of 10.6% and 12.6% between 2009 to 2014 respectively, despite global economic concerns. Even after a slowdown in 2015, price growth was still healthy, registering 7.9% and 8.3% in Kuala Lumpur and Selangor respectively during the year 2016.

Comparing third quarter of last year to the previous year, all house price index for Kuala Lumpur and Selangor indicated a growth of 5.9% and 5.1% respectively.

Christopher added that the Malaysian culture aids in the housing industry, saying that residential property ownership remains the most significant investment decision for most Malaysians during their lifetime. According to RAM Ratings, the overall loan growth for the banking sector will remain flat at about 5% to 6% in 2018. Christopher said that the residential property sector is expected to see a slow but gradual pick-up in market activity after the lull of the last several years.

Focusing on the Mont Kiara area, he also commented on the upward price movement in quarter one for 2018, which had increased by 2.3%.

“Rentals for Mont Kiara remained stable as they offer diversity in terms of facilities, design concepts and price points which allow them to cater to different tenants,” he said, adding that Mont Kiara is very established in the city, with its proximity to fantastic convention and exhibition centres, as well as the high court. Christopher said it is worth noting that rents vary depending on the age of the property, location and other aspects such as it being furnished or unfurnished, as well as the facilities and amenities nearby. Trinity Pentamont is expected to be completed in 2022

On another note, Trinity Group managing director Dato TPr Neoh Soo Keat is proud to unveil the company’s latest development, Trinity Pentamont, a condominium composed of 330 residential units in Mont Kiara. Sitting on 2.9 acres of land, the freehold development with a total gross development value of RM437mil is expected to be launched during the third quarter of 2018. The starting price for Trinity Pentamont is at RM600 per sq ft.